Kolhapur city is situated on the banks of Panchganga River and is surrounded by Sahyadri mountain ranges.  It is a city known for its historic forts, temples, and royal palace of the erstwhile royals. It is one of the best places to explore the splendor and magnificence of India.

Kolhapur is about 387 km from the Mumbai, the financial capital of India and is famous for the Indian hand-crafted leather slippers the Kolhapuri chappals (sandals) and its unique local jewelry a special type of necklace called Kolhapur Saaj. 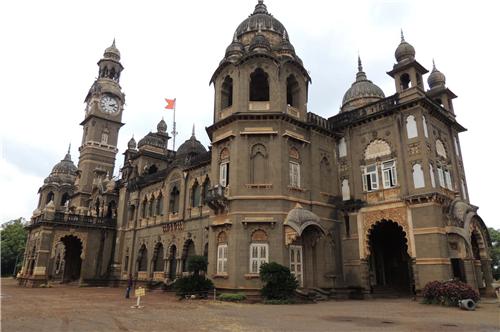 Kolhapur is famous for the Shri Mahalakshmi Temple and according to the popular belief Goddess Mahalaxmi started residing in Kolhapur following a quarrel with her husband Lord Vishnu. Kolhapur derived its name from a mythological event legend says, Goddess Mahalakshmi killed a demon named Kolhasur who used to oppress the local people. Before dying, the demon wished that the place be named after him and so the region got to be known as Kolhapur.

The Bhonsle dynasty was the ruling family of Kolhapur princely state and they pride themselves for being the descendants of Chhatrapati Shivaji Maharaj the Great. King Chhatrapati Shahaji II Puar was the last ruler of the state of Kolhapur. Down the years the rulers of Kolhapur promoted theatre, wrestling and other crafts. Today, Kolhapur is a modern and industrialized city.

Situated at an altitude of 1900 feet, Kolhapur enjoys a pleasant climate for the major portion of the year best time to visit Kolhapur is from October to March, but avoid the summer months of April and May when temperature is on a rise.

People from all religious backgrounds live here harmoniously. Hinduism is followed by majority of residents in Kolhapur and Marathi is a mother tongue of Kolhapuri people. Along with Marathi, Hindi and English languages are commonly spoken. Festivals like Diwali, Ganesh Chaturthi,Navaratri and Holi  known as the festival of colours is celebrated with great enthusiasm and the yes Kolhapuri people are extremely hospitable and welcoming.

Kolhapur as the Modern Confluence

Today, Kolhapur is an ideal bend of ancient tradition and modern influence. Its growth in modern times is just fascinating due to the abundance in natural resources like water, fertile soil, minerals, natural vegetation and animal wealth. It is one of the most agriculturally advanced districts in Maharashtra and is known for being a leading district in agro based industry. It is also a front runner for manufacturing engineering products, refined sugar and textiles. Today, Kolhapur prides itself for being a prominent center for the Marathi film industry and in possessing one of the highest per capita incomes among all Indian cities.

A visit at least once to Kolhapur with family and friends is highly recommended. Holiday makers and travel enthusiast living in Maharashtra or near Kolhapur district can make a single day trip or a week end trip for camping and trekking. Apart from that tourist from all over India and abroad can make a weeklong trip to explore this magnificent city and have a fun filled, enriching and joy full experience of Kolhapur.

The district of Kolhapur has several places for tourist and depending on their interest they can explore this exotic place.

Kolhapur is well connected by buses, trains, and airplanes that can help you reach this beautiful place of beauty and royalty.

Distance to Kolhapur from Major Cities of India