Jyotiba is a holy shrine located at an altitude of 3124 feet above sea level in the Panhala hill ranges in Kolhapur district and is an important religious destination for the Hindus.The deity of this temple is Jyotiba and is believed to be an incarnation of three gods Brahma, Vishnu, Shiva.

A beautifully built temple, the interiors have an ancient look with many wall cravings spreading different kind of good messages to society.The temple is big and houses many sculptures and historic monuments.Within the complex there are other temples and light - towers. 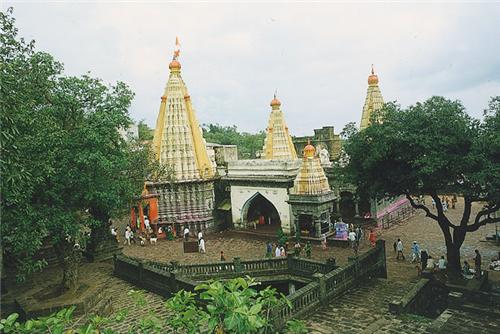 After defeating the dreaded demon Kolhasur and other devils, the goddess of wealth decided to settle in Kolhapur.In order to enhance the defense of her empire, she appointed four guards on the four sides of Kolhapur.The most important gaurd was Jyotiba, Mahalaxmi appointed Jyotiba at the northern side.Since then Jyotiba is also known as 'Kedareshwar' or 'Dakkahancha Raja'. 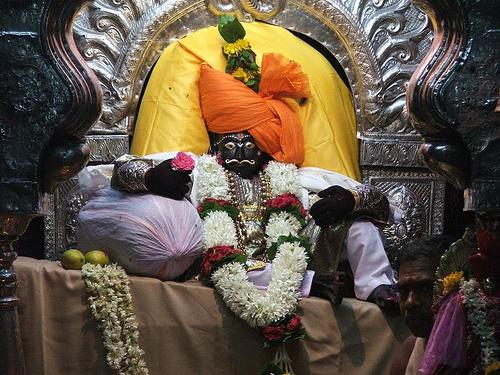 Every year on Chaitra Poornima i.e. on the occasion of “Ekadashi” a gala fair is held and thousands of devotees from all over India gather on Jyotiba hill.Devotees celebrate their joy of visiting their god by dancing with the huge sticks known as 'Sasankathi' and scattering huge amount of ‘Gulal’, making the whole mountain is turn pink.The joy and enthusiasm generated is hard to describe, but at least once in your lifetime you must experience this fair.

Jyotiba is a great place to visit during the winter or rainy season to enjoy the scenic beauty of this place.In case you want to skip the crowds at the temple, a visit during the afternoon is the best.Otherwise devotees can visit during Chaitra Poornima i.e “Ekadashi” when a grand fair is held.

Jyotiba is about 17 km north - west of Kolhapur. MSRTC buses ply regularly between Kolhapur city and Jyotiba from the main bus depot. Private taxis can also be hired from important junctions of Kolhapur city.

A trip to the Jyotiba temple will not take you more than 2 hours, so you can easily travel to and fro from Kolhapur within the same day. In case you are visiting the temple during the Chaitra Poornima (Jyotiba fair) and want to spend a of couple days at the holy place, MTDC Jyotiba resort is situated near the Jyotiba temple. There are many hotels and resorts in and around Jyotiba. In fact while reaching Jyotiba you will find many resorts and budget hotels on the way, they can be contacted as per to your budget and duration of your stay.

There is a langar (free food) organized within the temple premises during the annual fair.The food here is served free to all the devotees who visit the temple. The meal includes freshly cooked Indian meals  which are served to devotees round the clock during the festival. There are a couple of fast food centers and restaurants around Jyotiba temple offering regular Indian fare along snack items like vada pav, misal pav, tea etc.But it is strongly recommended to carry your own food and plenty of water.

Explore more about Travel in Kolhapur