The Kopeshwar temple, is a very ancient and artistic temple situated on the banks of Krishna river, it is a fine example of ancient sculptural technique. The temple was built sometime during the 7th century AD during the reign of the Chalukya kings.A few centuries later it was patronized by the Silhara kings during the 12th and 13th century. 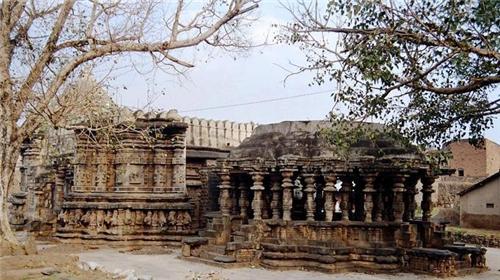 The temple was built with basalt stone and is an excellent example of artistic skills and workmanship of that era.The most amazing fact about this temple is that the black stone(basalt) used to build this temple is not found in the nearby areas for at least 600 km in any direction. Legend says that these stones were transported from South India through a water channel of Krishna River to this location for building this temple.The temple has a circular open sky roof, hall, old pillars with carvings of deities, animal carvings on walls and male and female artists performing various dances.

Structure of the Kopeshwar Temple

The temple is star shaped, and is essentially divided into four units i.e  Swargamandapam, Sabhamandapam, Antaral Kaksha and Garbha griha.

The first section is the entrance to the temple and forms the outline of the temple.All the external pillars extending out of the foundation of the temple represent symbols of power and strength carved out of them. Carving of animals like a bull, a wild goat with curled horns, elephants etc represent a symbolic strength to the structure of the temple. Carvings of the divine trinity of Brahma, Vishnu and Mahesh protect the two sides and the back side of the temple. Lord Shiva being at the center of all the three statues indicates that the temple has always been a Shiv temple. 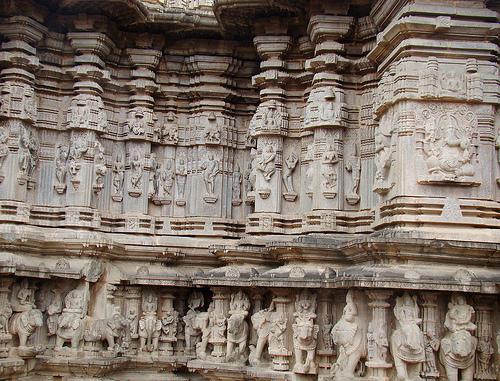 The most interesting and fascinating part of the temple is the second section, which consists of a dome that has an open finished circle on the top of it. If you lay down just below this dome and look at the open sky above it gives you a feeling of how close the moon is !! Actually it gives you a feeling of being on the Chandrayaan. The mystery surrounding this dome as the local legend says, that during ancient times yagna's were performed here under this dome and the holy smoke along with holy recitations reached directly to the Gods above in the heaven. 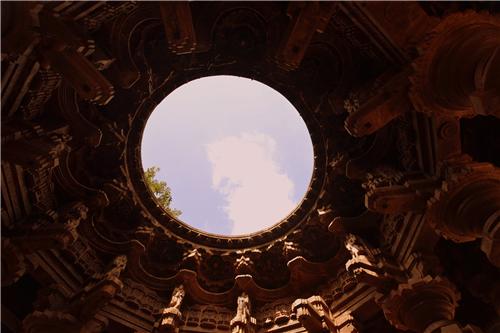 The third section has many sculptures on the pillars of the temple, depicting a collection of popular mythological stories of the ancient Panchtantra, Ramayana, and different reincarnations of gods and goddesses.The statues of Gautam Buddha and saints of other faiths are the most surprising and enigmatic parts of this section. It shows that this temple was a truly secular temple and it kept in mind followers of all faiths.

The fourth section of the temple forms the Garbha griha (The main dome) of the temple. This section has a Shiv Ling in the center.

Destruction of the Kopeshwar Temple 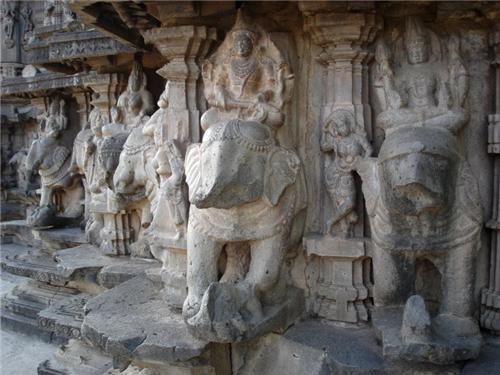 It is sad to see that many of the sculptures which are closer to the ground level have been mutilated or badly damaged by the Islamic invaders in the later centuries.History says that Adil Shah the ruler of Bijapur Kingdom, the merciless Aurangzeb, Khyder Khan and their armies supposedly mutilated the carvings on the temple and cut almost all the elephant trunks.Though there has been no exact historical evidences of ‘who destroyed what’ but it is very distressing to see such a beautiful work of art ruined.

Kopeshwar temple or Khidrapur temple can be reached via Kolhapur, Ichalkaranji or Miraj.
The distance from Kolhapur to Kopeshwar temple is about 58 Km.
Nearest Station and Bus stand : Kolhapur Railway Station / S.T Bus depot in Kolhapur city.

State Transport buses also ply from Kurundwad(Kolhapur) to Khidrapur at 1 hour interval starting from 08:00 am till 12 noon after that there are no buses. Khidrapur is 18 km from Kurundwad and takes about 20 - 25 minutes to reach here.

Kopeshwar temple today is being restored and is well maintained under the supervision of Archeological survey of India. There are two members of staff posted at this temple site. Mr  Parmeshwar (an ex-service man) and Mr Umesh Gurav(the priest of the temple). Mr Umesh has a lot of information regarding the temple's history and it is recommended to seek knowledge about this once 'Lost temple'.

Accommodation and food at Kopeshwar

There are as good as no lodges or hotels here in Khidrapur. So its best to find accommodation at Kurundwad or at Narsobawadi.There is nothing here other than the Kopeshwar temple so overnight stay would not be necessary.

There are few food joints offering basic snacks like Vada Pav, Bhaji Puri etc.But it is strongly recommended to carry your own food and plenty of water.

Kopeshwar temple can be visited anytime during the year, but avoid during summer season(April to June).It takes not more than one and a half hour to see the entire temple and the nearby areas, so a visit in the morning is the best time to visit this ancient temple.