Mahalaxmi temple or Ambabai temple as it is locally known is situated in the heart of the Kolhapur city. The temple was constructed sometime during the 6 or 7th century AD. The temple is dedicated to Goddess Mahalaxmi and the temple has been taken care of over the years by several ruling dynasties and local people of Kolhapur. 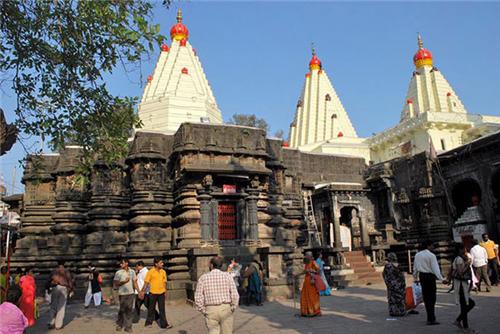 The entire temple is built of black charnockite rock .The sabhamandap has been built during the maratha period and has a wooden construction typical to that period. The temple has a star shaped design like many ancient temples and its walls have several decorative designs and images of deities.

Early morning visit to a temple is always pleasant and peaceful and is the best time to visit as it is not crowded but on important festivals and Fridays, you can expect large number of devotees. It is a Shakti Peeth so once you enter the temple you can feel powerful and positive vibrations and yes do not miss to see the shreeyatra embedded on the temple wall.

This temple attracts thousands of visitors from across the globe. Kiranotsav is a mega event, which happens at the dawn, when the first rays of the sun enters the temple premises and shines the idol of Shri Mahalaxmi. People wait for long hours, just for this auspicious event the doorsteps, and the day is continued with various processions and poojas.

There are several shops selling the pooja thali and a sari that you need to offer during the worship of the goddess. You are not supposed to carry a camera or backpacks inside the temple. There is a security check which then leads to a different queue system for male and female. The Kandipedha is a specialty sweet one must taste and buy to take home from the sweet shops outside the temple.

So make sure you reach the temple at the right time (i.e. early morning) and get a quick darshan and later get enough time to visit other tourist spots in Kolhapur.