The Shalini Palace was built in memory of Princess Shrimant Shalini Raje in 1934 at a total cost of rupees eight lakhs. The palace is situated on the banks of the beautiful Rankala lake whose perimeter is about 4 km and is surrounded by tall palm trees and exotic gardens, which is a great place to relax and click pictures. During moonlit nights you will enjoy the reflection of the palace on the Rankala lake. 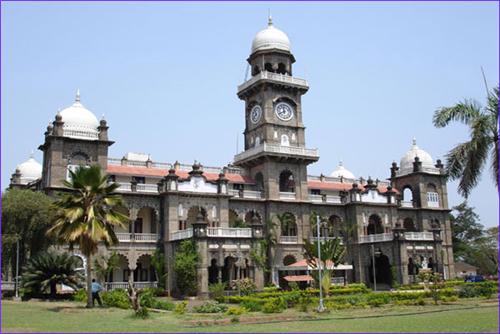 Shalini Palace does not have much of a historic importance attached to it, and was built during the mid of the 20th century for the royal family of Kolhapur. But the Palace attracts large numbers of tourist every year because of its has spectacular setup and scenery around . In the year 1987, this palace was converted into a heritage palace hotel and today it prides itself in being one of the earliest heritage hotels in India.

The entire structure of the Shalini Palace is made of delicately carved Italian marble and black stone. The splendor of the palace is enhanced by the addition of rich ornamental wooden entrances which have carved Belgian glass embedded into it along with a crown of the Kolhapur Maharaja. Imperial black stone arches will lead you to the verandah and porch area. The stained glass arches and the giant clock tower have been restored back to their original style and grace.

The pomp and grandeur of the royal family of Kolhapur are reflected by the inscription work done on the Belgium glass of the main door. The pillars are made of black stone and the entrance portico is an architectural masterpiece.Viewing the palace in the calm waters of the Rankala lake from the Sandhyamath cliff is a fascinating experience.

Kolhapur has a pleasant climate all round the year, so tourist can enjoy the view of the Shalini palace and Rankala lake anytime during the year.

Tourist Information
Apart, from enjoying the palace hotels, unparalleled splendor, visitors can also learn about the history of the palace and about the royalty of Kolhapur.The palace is beautifully situated in front of the 'Rankala lake' where boating is available and is surrounded by well manicured lawns and gardens which are host to a variety of birds.

While strolling along the banks of the Rankala lake, one must enjoy the 'Vada Pav' from the stalls around, which is a famous snack item of Maharashtra. The gardens around Rankala lake have some special amenities available for children to play. It is a nice place to stroll in the evening's.Jyotiba temple and the Panhala fort are easily visible from here which gives a  panoramic view.

Accommodation Options at the Hotel

The hotel provides great accommodation with 39 rooms for its guests, with royal delux rooms, prince and princes suites and the grand Yuvraj and Maharaja suites. All of the hotel rooms are majestic, grand and are full of modern day amenities.

Darbar Restaurant : Is a multi -cuisine, serving authentic and mouth - watering delicacies.
Rankala Bar : The bar, serves all sort of drinks and snacks to please your mood and taste buds