After a beautiful day of sightseeing and other activities, it's time to indulge in some shopping in Kolhapur.

A trip to Kolhapur is always incomplete without taking back home the local specialties. Kolhapur has always maintained its rich heritage and culture and for centuries the skilled craftsmen have preserved and passed on their skills to the present generation, today Kolhapur has a lot to offer to its tourist which makes their visit a memorable one.

Traditionally, Kolhapur has been popular for its cotton textiles but in particular it is the Kolhapuri Sarees which is in great demand with the women folk in Maharashtra. Women touring Kolhapur can add more value to the collection of sarees by buying a couple of Kolhapuri sarees.

But it is the locally made silver jewelry and Kolhapuri Chappals that are the most sought out handicraft items of tourist visiting Kolhapur.

What and Where to Buy in Kolhapur

A traditional handwoven leather footwear which is available in all sizes and can be worn by children and adults alike.Purchasing a pair of Kolhapuri Chappals is a must when you are visiting Kolhapur and definitely you would not want to leave Kolhapur without buying a pair of these famous chappals. 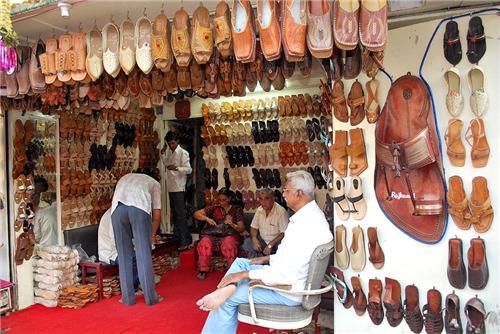 The rates of Kolhapuri Chappals vary from being reasonably priced to the expensive export quality ones, depending on your choice and budget this footwear can be purchased from shops at either Mahadwar, Shivaji or Bahusinghji road where you will find a good variety of authentic Kolhapuri Chappals and other leather goods. Shetkaari Bazaar is the cheapest place to shop in Kolhapur and is popular amongst the villagers from surrounding areas

Kolhapuri Saaj and Other Jewelry Items

Hupari, a sleepy town in Kolhapur district is famous for its local artisans who are skilled in designing and making of jewelry items along with several items of silverware. The age old business of jewelry making of this area today has expanded throughout India and jewelry items made in Hupari are exported to America, Romania, Belgium and Nepal.

Kolhapuri Saaj is a special type of necklace known to dazzle the beholder and is very popular amongst Maharashtrian women. Har, mohanmal, malas, chaplahar, bormal, pohehar and putlihar are other jewelry items made in Kolhapur whose names are derived from their unique shapes. Thushi, a choker type of jewelry with tiny gold beads is very popular in Kolhapur. 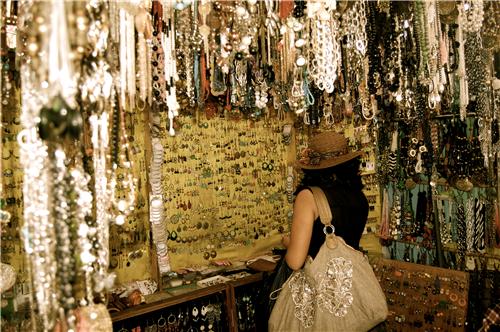 The best place to buy the Kolhapuri Saaj necklace and other antique jewelry is at Karekar Jewelers in Rajarampuri area. They have a good collection of authentic Kolhapuri jewelry and are one of the co-founding members of the Saaj jewelry. Their 3rd generation is involved in the same business. Their charges are reasonable and have the least labour charge on their jewelry items so you will get a good bargain for whatever you buy.

Shops in Mahadwar, Shivaji road are regarded as one of the best places to shop for jewelry items. Shetkaari Bazaar is also known for being the cheapest place to shop for imitation and artificial jewelry. So, when you are on a shopping spree do buy some artificial jewelry of Kolhapur - especially the  Kolhapuri Saaj and other beautiful jewelry items as they are the best souvenirs you can take back  home for your family and friends.

As you travel around the rural areas of Kolhapur you will see a lot of sugarcane fields and jaggery factories since Maharashtra is well known to be the largest producer and consumer of jaggery in India.

Jaggery is used on a daily basis in many households in Kolhapur while preparing vegetable curries or dals. It is also used during religious festivals like Makarsankranti for preparing tilgud and other sweets. 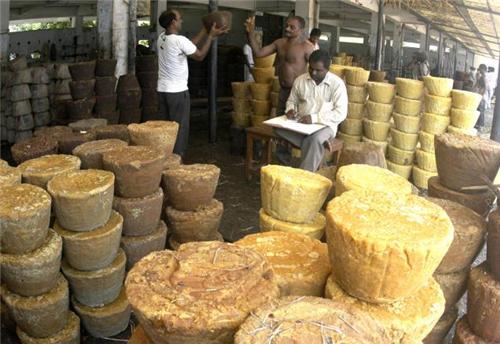 Jaggery is still prepared in a traditional way in the villages around Kolhapur, which are dotted with numerous 'Gurhals' - a place where sugarcane is turned into jaggery. Once jaggery is prepared it is ready for consumption, so it is immediately dispatched to auctions or soudas at Kolhapur's Shahupuri market yard which is a wholesale market for jaggery. Businessmen visiting Kolhapur can strike a good deal here if they are dealing in jaggery business.

As a tourist you can buy jaggery which is easily available in different varieties i.e. from dark brown to light golden colour from shops in the local market and you can be assured that they are pure, fresh and inexpensive.

During the process of making jaggery from sugarcane a byproduct of production of jaggery is formed midway called as ‘Kakvi’. It is similar to honey and used as a sweetener, and is bottled and sold in the local market as syrup.

Kakvi has medicinal properties and is considered very beneficial to health by the traditional medical system of Ayurveda. So, when you are in Kolhapur you can take back home a bottle of Kakvi which is available in any general store in Kolhapur and you can enjoy its benefits by using it in your daily meal.

Is a special type of masala prepared by Kolhapurkar's and is a mixture of chillies, onion, garlic and other spices. 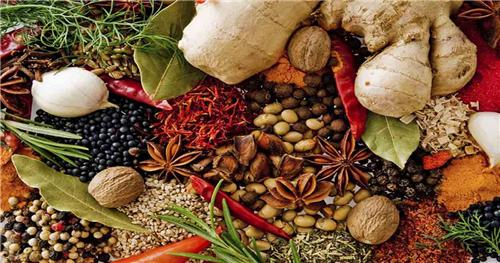 This fiery stuff is commonly used in local recipes of Kolhapur like misal, meat curries and vegetable curries. The Kolhapuri masala is not only popular with people in Maharashtra but throughout India as people enjoy their meal cooked with Kolhapuri masala as it adds a punch to a simply made meal.

So when you are in Kolhapur, spend time and learn more about the shops and local markets of Kolhapur and understand about their famous offerings and yes do not forget to buy souvenirs and gifts for your friends and family members back home. Shop till you drop after all shopping means to splurge.