Sports has always been an integral part in the day to day life of the people of Kolhapur. In olden days the Rulers and the effluent of Kolhapur indulged in Sporting activities like Horse Riding, Wrestling, Archery and Shooting.

Today, most citizens of Kolhapur have taken up some kind of sporting activity of their interest to keep themselves fit and enjoy the sport giving them a break from their stressful lives. Be it any kind of sport weekend tournaments is a very common affair for people of all age groups, public grounds are full with cricket lovers, football enthusiast displaying their skill to the maximum.

Like any other city Kolhapur also has certain sporting activities that are popular with the masses, i.e wrestling, football, cricket, kabbadi, kho-kho, table tennis, badminton etc. In rural areas of Kolhapur district, one will get the glimpse of children playing Gilli-danda and Pakada-pakadi an age old game played by children in India which has its own fun and charm.

Khasbaug Kusti Maidan where wrestling competitions are held has a very interesting story of how it came to existence. 'Kusti' i.e Wrestling was already a very popular sport in Kolhapur for centuries. Many members of the erstwhile royal family were very good wrestlers and weekly wrestling competitions were held in the olden days on an open ground on a Kusti Houda which is a platform on which the wrestling matches takes place.

During a trip to Europe King Shahu who himself was a very good wrestler saw the famous stadium in Rome called 'Callocium'.So impressed was he on seeing the stadium that he decided he would build a similar one in his home town of Kolhapur.So on his return he got the stadium called the Khasbaug Kusti Maidan built which was known for its unique design in India and about 60000 people could witness a match with the Kusti Houda at the center. 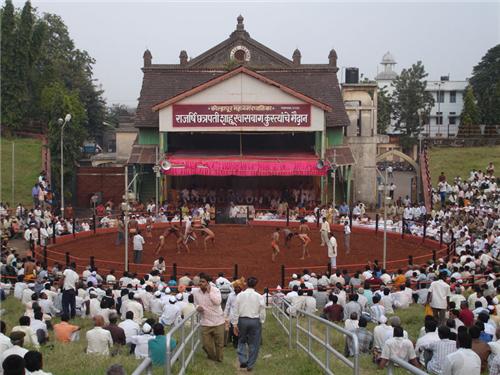 This arena today has a seating arrangement of 25000 people around the Wrestling ring.

In the year 2012 for the first time Khasbaug Kusti Maidan was the venue for the '46th Hind Kesari wrestling championship' during this period the natives of Kolhapur enjoyed themselves to the carnival atmosphere that got created in the city.

In present times this wrestling arena is managed by the Kolhapur Sports Association and this sports body organizes wrestling tournaments throughout the year in Kolhapur city. Young enthusiastic teenagers from rural parts of Maharashtra enroll themselves in these arenas and they are trained by a "Vastad" a local term for a Master.Currently, around 40 wresting arenas are functioning in Kolhapur district and locally here they are called as "Talims". Many styles of wrestling competitions are held throughout the year in which participants who win get huge sums of money, name and fame and for themselves and their respective "Talims".

In order to keep this old wrestling style preserved the state government has provided regular aid. Sugar companies of Kolhapur have extended their support by providing scholarships to the young wrestlers and many other charitable trusts are making their contributions to keep this ancient style of wrestling alive.

Wrestlers from Kolhapur who have won awards on various platforms nationally and internationally are:

With changing times today’s teenagers of Kolhapur have made football their favorite sport. Infact footballs popularity in Kolhapur is similar to wrestling which once upon a time attracted youth from all over Maharashtra. So popular is football across Kolhapur that most wrestling “Talims” have their own football teams.

The KSA(Kolhapur Sports Association) along with KUFA(Kolhapur United Football Association) have done a commendable job in encouraging youth towards football and organizing football matches in Kolhapur at local, national and international levels.

The major football clubs in Kolhapur are:

Apart from these major clubs many armature football clubs have sprung up across the Kolhapur district. It is estimated that about 2000 players are registered with different leagues and are tournaments are played right from under 14 level to senior most levels.

These tournaments draw huge number of crowds from all over Kolhapur and the intensity and passion with which matches are played its a common scene that after the matches there are sometimes minor clashes between fans just like the ones we witness in the European league football games.

Major football tournaments in Kolhapur are played in the famous Rajarshi Shahu Stadium of Kolhapur that was built in the year 1960 with the idea of conducting wrestling tournaments but with the growing popularity of football it was thrown open to the sport as well. The Rajarshi Shahu Stadium is a huge stadium and is a double storyed complex with a spectator’s capacity of 10000.Every year along with other major tournaments "The Football Mahasangram" League Championship is held here with great fanfare.

Observing the great enthusiasm and support generated for the game by the local people of Kolhapur the All India Football Federation along with Kolhapur Sports Association had organized an international level football match event between the women's team of India and Holland in January 2013 at the Rajarshi Shahu Football Stadium of Kolhapur city. So, with this kind of Football fever generating in Kolhapur surely in the coming time we will see many football hero’s from Kolhapur representing our country and playing in foreign league matches.

Like any other Indian city, Cricket is also amongst the popular sports played and enjoyed by the citizens of Kolhapur and has its share of fan following.The governing body of Cricket in Kolhapur is Kolhapur District Cricket Association (KDCA) and cricket matches are conducted by this association. 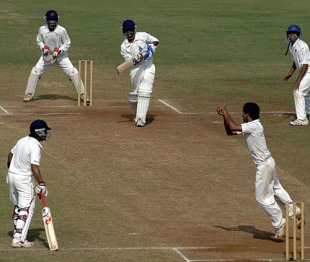 Kolhapur is known to host the Ranji Trophy Cricket matches which is also known as First Class Cricket matches wherein interstate teams are seen competing with each other for the trophy. The “Shri Chhatrapati Shivaji Stadium” in Kolhapur is known to host these high profile matches. Besides the Ranji trophy matches  the Chhatrapati Shivaji Stadium also host University level matches, High profile tournaments like the Vijay Merchant Trophy, Polly Umrigar Trophy, Rohinton Baria Trophy and other Under 15/16  tournaments and school level tournaments  are played here.

Kabaddi is an outdoor sport played on a clay court is a very popular sport with the masses in both urban and rural areas of Kolhapur. It gained popularity with the masses because of its simplicity and easy rules and does not require any state-of-art infrastructure. 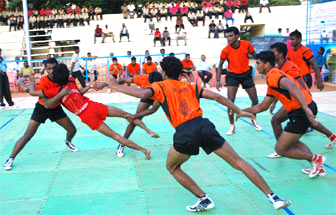 Kabaddi is a very popular sport at school and university levels in Maharashtra and many tournaments are held annually with students of all age groups taking part with great enthusiasm. Kabaddi today is played on international level by many countries. In India Kabaddi attained national status in 1918 and the state of Maharashtra is credited for bringing this game to the national level and it increased its popularity among the masses.

Since this sport is internationally recognized and India is the world champion the sports administration in Kolhapur has upgraded to international standards by building indoor stadiums and the sport is played on synthetic surface during state level and national level tournaments.

The “Shivaj Maharaj Kabaddi” cup is organized by the Maharashtra government annually and was hosted by Kolhapur in the year 2013 around 700 players and officials visited Kolhapur for this tournament and it was a grand success.

Kho Kho is one of the most popular and traditional sport played originally by the Marathi speaking people of Maharashtra. Infact Kho Kho finds its origins in the state of Maharashtra and like any other traditional Indian game Kho Kho is simple and easy to understand game, however it requires a lot of physical fitness, stamina, speed and strength and even though a game last for a few minutes but it is leaves one completely exhausted. 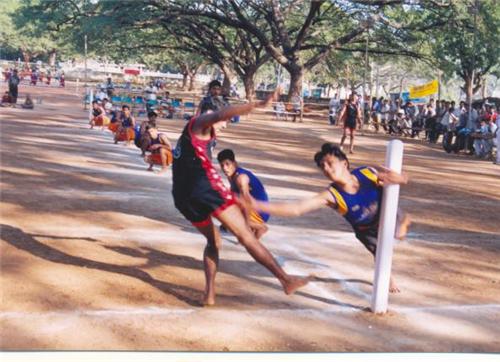 This game is played by men, women and children of all age groups in Kolhapur. The Game is played in a rectangular shaped ground, which is evenly surfaced and 2 poles at the 2 ends are all that is required the game last for about 40 minutes.

Kho Kho was played informally for many years till it was formalized by the Deccan Gymkhana club of Pune before independence in 1935 and the rules and framework were set however with time changes were made in accordance with the modern times.

The Kho-Kho Federation of India (K.K.F.I.) is the primary body for this sport and it has branches in all states of India. In Maharashtra (Kolhapur) Kho Kho championships are conducted at mini level, junior level and national level for both men and women.

Players who have been awarded the Arjuna Award for Kho Kho from Maharashtra a few who are from Kolhapur are: Shri Shrirang Inamdar,Nilima Sarolkar,Achala Devare,Shri Shekhar Dharwadkar,Usha Nagarkar. 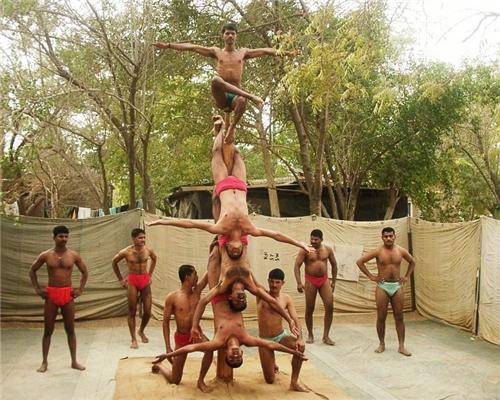 Practicing Mallakhamb keeps your body flexible and strong and benefits ones overall health it is a very useful form of exercise for sportsmen who play other games.In Kolhapur, Mallakhamb is popular in schools, universities and gymnasiums where you will find young boys and girls taking active part in various types of Mallakhamb.

Pole or fixed Mallakhamb: In this version a vertical wooden pole is fixed to the ground and the participants perform acrobats and poses while hanging on the pole.

Hanging Mallakhamb: A smaller version of the Pole Mallakhamb wherein a participant performs balancing exercises from a pole which is suspended with a hook and chain.

Rope Mallakhamb: In this version a participant performs yoga and gymnastic positions performed with a rope suspended from the ceiling.

Revolving Bottle Mallakhamb: A new version invented recently it consists of 32 glass bottles placed on a wooden platform, with the Mallakhamb balanced on the top.

State-level Mallakhamb competitions are held every year and 250 players in all from various cities of Maharashtra take part in this competition.