Vishalgad fort, is also called 'Khelna' or 'Khilna' by locals, and was one of the important forts of the Maratha empire. The name ‘Vishalgad’ means grand fort in Marathi, the name was given by Chhatrapati Shivaji Maharaj after annexing it during 1659. The structure covers an area of 1130 m and was built on a hilltop in the Sahyadri mountain ranges at a height of 3500 feet above sea level, and is about 76 km north - west of Kolhapur. 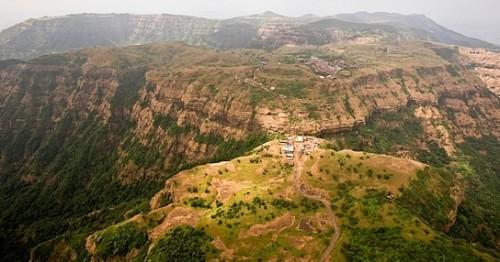 Vishalgad Fort was built in the year 1058 A.D. by a Shilahara ruler 'Marsinh' and was initially known as 'Khilgil' fort. But down the centuries it passed into the hands of many rulers who ruled around the Deccan region. When the fort was under the control of Adilshah of Bijapur, Shivaji wanted to capture the fort but the terrain of the fort was difficult and conquering appeared a herculean task. Shivaji attacked the fort several times, but the Adilshahi regiment were defending the fort valiantly.

So then, Shivaji came up with a strategy. Accordingly, a group of Maratha soldiers went up to the fort and convinced the Adilshahi killedar (commander) of the fort that they were not happy with the rule of Shivaji Maharaj and thus had come to serve the Adilshahi. The Maratha's were successful with their plan and then on the following day, they revolted and caused total mayhem inside the fort. Simultaneously, Shivaji Maharaj attacked the fort from the outside and in no time conquered the fort. Shivaji then renamed the fort as 'Vishalgad'.

Architecture of the Vishalgad Fort

Vishalgad fort has several temples and many structures inside its complex. However most of these structures are in a dilapidated state. Some of the temples inside the complex are Amruteshwar Temple, Shri Nrusinha Temple and Sati`s Vrindavan.The fortress also includes tombs dedicated to Phulaji Prabhu Deshpande and Baji Prabhu Deshpande who served under Chatrapati Shivaji. The tomb of Hazrat Malik Raihan is also located in the vicinity of Vishalgad fort. 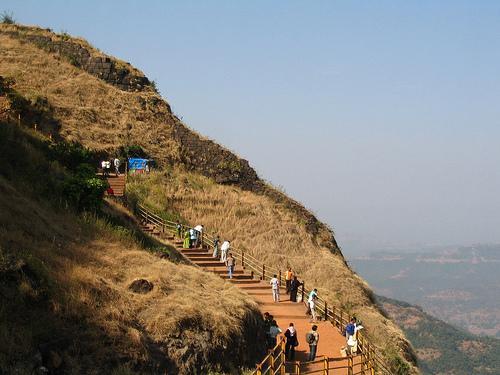 Best time to visit : All around the year.

How to reach : State transport buses regularly ply from Kolhapur, Ratnagiri and Belgaum. Private cabs can be hired from Kolhapur.The nearest railway station is Kolhapur. Vishalgad fort is about 80 km from Kolhapur.

Where to eat : There are food stalls and small eateries at the fort, but it is recommended to carry your own food and water.

Where to stay : There is a Sanatorium on top of the fort, but ideally stay at a hotel in Kolhapur city which has numerous lodges and hotels.

Activities & things to do :

You will need at least 4 to 6 hours to see all places in and around the fort. During monsoons, the fort has spectacular views of waterfalls all around it. Apart from that you can contact adventure sport groups organizing rock climbing, rappelling, and trekking activities.

A humble request to all travelers :

While visiting Vishalgad fort please keep the nature clean and carry your trash and dispose it in a decent manner.